Okay DP Ruto Is Corrupt As You Claim, But Who Is Not?

If anything we read in the newspapers is anything to go by, then I must be forgiven for saying that if corruption was to be a person in this country, ladies and gentlemen, that person would be Ruto. In fact, or should I say for the record, a survey conducted by Ipsos indicated that Kenyans think Ruto is the most corrupt leader. But let me sound a warning. This article should not be misconstrued to mean that Ruto is corrupt, but again, this is not to mean that Ruto is not corrupt. That notwithstanding, some politicians and the githeri media, in general, have made us believe that Ruto is the most corrupt individual that has ever walked on earth. That Ruto is no better from Jean-Bedel Bokassa who bankrupted his country by spending a third of its budget on his coronation; Mobutu Sese Seko who was known for spending one million dollars a week; Farouk I who allegedly stole Winston Churchill’s pocket watch while on a State visit or Sani Abacha who we are told was excessively corrupt and wicked that when he died because he could not go to heaven, satan refused to admit him in hell claiming “there can only be one devil in hell at a time.”

But the harsh truth is that if Ruto is corrupt, every other person calling him corrupt is equally corrupt. These are the biblical sinners throwing stones. Even more, it seems that this country is like a mining site. Everyone is dirty. This reminds me of the Goldenberg scandal.

It is said that Paul Muite accused Kamlesh Patni of giving the then opposition leader, octogenarian Jaramogi Oginga, 2 million to facilitate Oginga’s campaigns after Oginga had claimed: “things were very bad.” Patni responded by accusing Muite of taking 20 million from him through his company “Multi Phases”, a claim that Muite denied when he wrote a fax to a media house stating that such a company does not exist. This was funny and ingenuine of Muite considering the paper sent to the media house had a letterhead reading “Multi Phases.”

Paul Muite was living in a glass house yet busy throwing heavy stones at Patni. But with time it became clear that he too benefited from the proceeds of Goldenberg. Now, these politicians accusing Ruto of being corrupt, who among them is not? Raila Odinga once publicly accused Musalia Mudavadi of being utterly and irredeemably corrupt for having overseen the theft in Goldenburg. Moses Wetangula was implicated by a parliamentary committee of engaging in corruption in the embassy property purchase scandal. Let’s not talk about him being linked with the fake gold that was seized in Nairobi, recently. Kalonzo Musyoka, according to a statement by Machaokos Governor to Senate, grabbed more than 4,000 hectares of land when he was vice president. Raila Odinga is surrounded by irredeemably corrupt individuals. When he was Prime Minister, the World Bank suspended funding the kazi kwa vijana program on the basis that his office was misusing the funds. For today, let us not talk about the Githingo tapes. 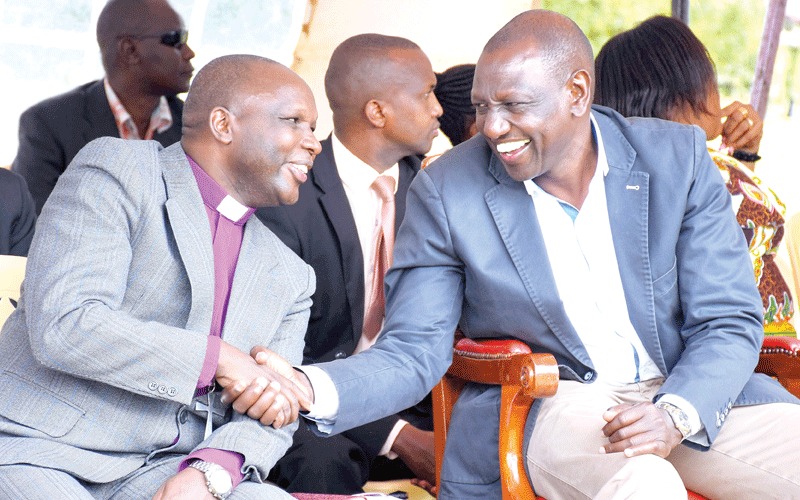 This is just a clear exposé that many of these politicians accusing Ruto of being corrupt have all been linked to corrupt deals in one way or another. Those yet to might still be looking for opportunities to engage in a corrupt deal. This is because nothing appears to be working in this country, and therefore it is hard to make genuine money. You either get engaged in corrupt deals via kickbacks if it’s a tender you are looking for. Or if you are doing business you collude with KRA not to pay tax.

There might be some few Kenyans who are not corrupt. Ni weupe kama pamba. I do not believe Raila is one of them. I am not one of them. I once bribed an officer to get quick services at the Helb offices because I saw someone else bribing him. However, I have never stolen bundles from Safaricom.

To sum up, as a country, we should come to a consensus that all our leaders are corrupt and most of us are also corrupt. With this understanding, when choosing our leaders we should get the lesser evil. But first, they must declare their ill-gotten wealth and promise not to continue stealing once they get into office. Secondly, they must tell us how they are going to deal with corruption because I understand, from my primary school English that, only a thief can catch a thief.

No comments to show.

President Uhuru presides over the Passing-Out of the National Youth Service Recruits.

The House of Hope Bishop Godfrey Migwi is dead.